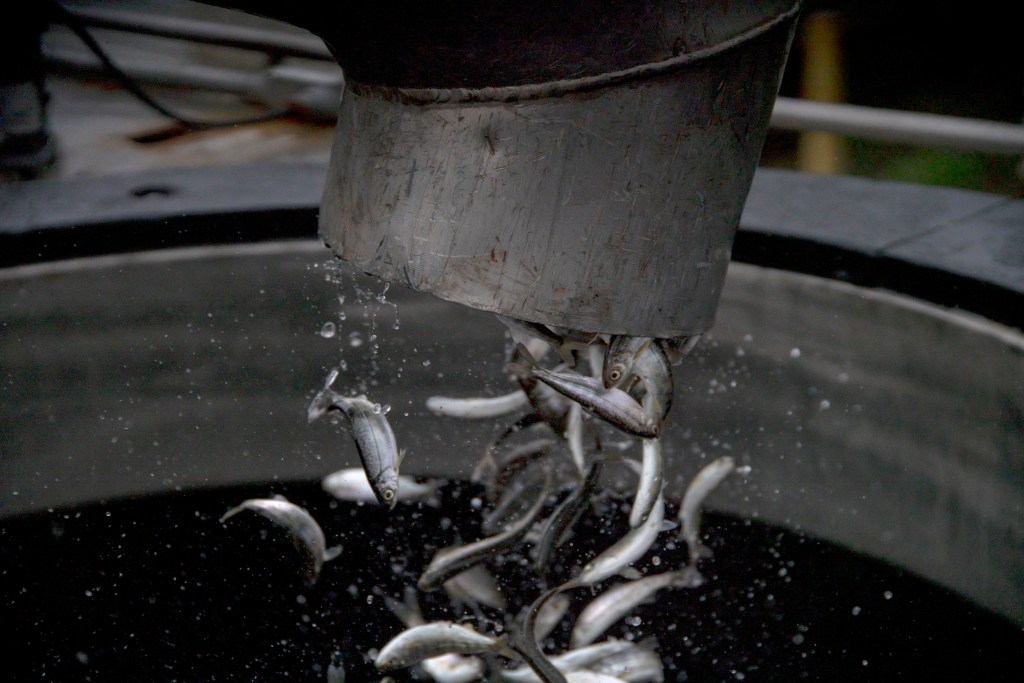 When we visited Mark Bidwell’s cattle ranch on a CBCIA tour, we saw his “fish feedlot” where Mt. Lassen Trout Farm raised trout.

This is an interesting article by Laura Mahoney.

When you think of a private fish farm, you usually don’t think of conservation, but of a new, evolving partnership.

The Coleman National Fish Hatchery and the US Fish and Wildlife Service’s Mt. Lassen Trout Farm have come together to raise endangered chinook salmon in the Sacramento River and release them into Battle Creek as part of the Jumpstart Project to Reintroduce the winter run in the watershed.

Phil Mackey has been raising trout for almost 50 years on the trout farm, so when biologists approached him to use one of their hatcheries as a location to raise endangered chinook salmon in the winter, he didn’t. not hesitated.

Mount Lassen Trout Farm is a private aquaculture facility that is primarily known for raising trout used in lakes and ponds, and for providing food fish to restaurants in the State of California. Mackey and his daughter, Katie Harris, co-own the farm and take great pride in the fish raised in their facility.

“Wow, it would be such an honor to play even a small part in restoring the Battle Creek watershed,” said Harris, when she learned the farm would be used to raise runs. winter. “This is something very unique, and we are extremely proud to have the opportunity to be part of this ambitious endeavor.”

Mackey and Harris both said they had never heard of another private hatchery working with government agencies for the conservation of an endangered species.

“The response from the private aquaculture industry has been overwhelmingly positive,” said Harris. “The people I work with through the US Trout Farmers Association and the National Aquaculture Association always ask me how the project is doing. They are rooted for the success of this as much as anyone because they recognize how important this partnership is. “

Hydroelectric development on Battle Creek in the early 1900s resulted in the complete exclusion of winter runs from their historic spawning habitat in the creek and their disappearance from the watershed. Until recently, there was only one winter run spawner population that exists, downstream of Keswick Dam in the Sacramento River, which is completely outside of their historic spawning grounds.

However, that all started to change in 2017 when the National Marine Fisheries Service, California Department of Fish and Wildlife, and the Service decided to relaunch efforts to reintroduce the winter run to Battle Creek, which is now known as the “Jumpstart” project. . Between March and April 2018, over 220,000 winter run juveniles were released into the North Fork Battle Creek.

The juveniles released into the creek were the offspring of captive broodstock spawned at the Livingston Stone National Fish Hatchery, the Service’s winter hatchery located at the base of Shasta Dam. After spawning, the juvenile fish were transferred to Coleman where they were reared for a few months to imprint in the water and then released.

Several agencies and partners, including the California Department of Fish and Wildlife, the Bureau of Reclamation, PG&E, the US Fish and Wildlife Service, and the National Marine Fisheries Service, have worked together to find other locations on the North Fork Battle Creek where the Winter upwelling could be raised for reintroduction efforts.

Laurie Earley, supervising fish biologist for the Service, has worked on fish conservation efforts at Battle Creek for almost 15 years and is the Red Bluff Fish and Wildlife Office’s senior biologist for the Jumpstart Project. She said the group had worked for many years to assess breeding locations and to gain support. Finally, in June 2019, funding was provided by the California Department of Fish and Wildlife and in September 2020, an agreement was finalized with the farm.

“A lot of people helped set this project up, from the development of the project to the final cooperative agreement, it was really a team effort,” said Earley. “Working with partners like Phil and Katie, who are invested and passionate about the success of not only this project but the restoration and reintroduction efforts at Battle Creek, has reinforced the collaborative nature of the project. “

As the project enters its fourth year of releasing fish at Battle Creek, the hard work pays off. In the 2020 return year, more than 1,000 adults from the winter run returned to Battle Creek. These fish were released in 2018 and 2019 and have completed their journey to the Pacific Ocean and returned to what should be the native spawning grounds for the Battle Creek winter run. For the first time in decades, biologists were able to document winter spawning at Battle Creek and North Fork Battle Creek, and they even captured juveniles in a rotary screw trap in lower Battle Creek, showing that spawning was a success.

This year, 40,000 winter runs are raised on the farm and 120,000 at Coleman. Brett Galyean, project manager at Coleman, often communicates with Mackey and Harris to discuss the growth, care and feeding of fish at both facilities.

“Katie, Phil and the staff at the Mt. Lassen Trout Farm have done a great job observing and learning the subtle differences in breeding and feeding winter chinook salmon compared to other salmonids,” said Galyean.

The farm and Coleman’s fish will be released together into North Fork Battle Creek in the spring of 2021. Using a combination of wire-coded tags and acoustic tags, biologists will monitor the two groups of fish after the release. release. Acoustic beacons allow real-time monitoring of fish when they are released into the creek and wire-coded beacons will be used for long-term monitoring of fish when they are captured as adults. This information will be used to help biologists compare the survival and possibly the reproductive success of the two groups.

This new approach to meeting the challenges of conservation has resulted in a partnership between unlikely partners.

“I appreciated the mutual respect between everyone involved in this project,” said Harris. “The collaboration and support we have received from all the agencies involved has been tremendous. “

Galyean added: “I look forward to working with them on this project over the next few years.”

Jean Barton has been writing his column in the Daily News since the early 1990s. She can be reached by email at [email protected]