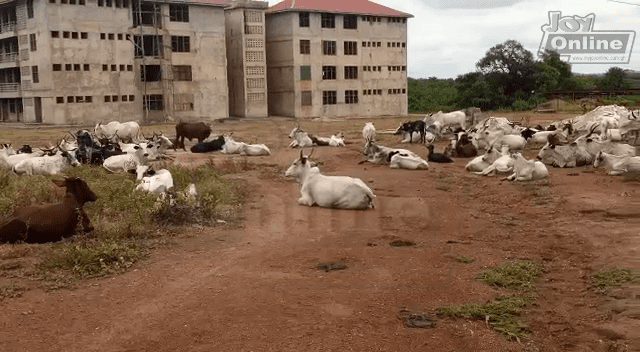 An abandoned Community Day Senior High School project, which started in 2014 in Damanko in the North Nkwanta district of the Oti region has been turned into a cattle ranch.

The facility is one of 200 community day schools that the former National Democratic Congress (NDC) administration pledged to build across the country by 2020.

Although the covered electronics block is about 80% complete, residents have complained that the failure of the current government to complete and fully furnish the school is disappointing.

Talk to Adom News‘Kwame Owusu, residents said the stalled community day school project has affected the education of children in some communities who have completed high school and are expected to benefit from the project.

They also complained that enrolling their wards in remote high schools has increased their financial burden because it is expensive.

For his part, Danmanko West Electoral District MP Obed Limbey said it was disheartening that the project was stalled.

He underlined that future students in SHS have difficulty in having access to education.

He noted that the completion of the school will boost the education system in the region.

Plans in motion for a large-scale beef farm – fbc news