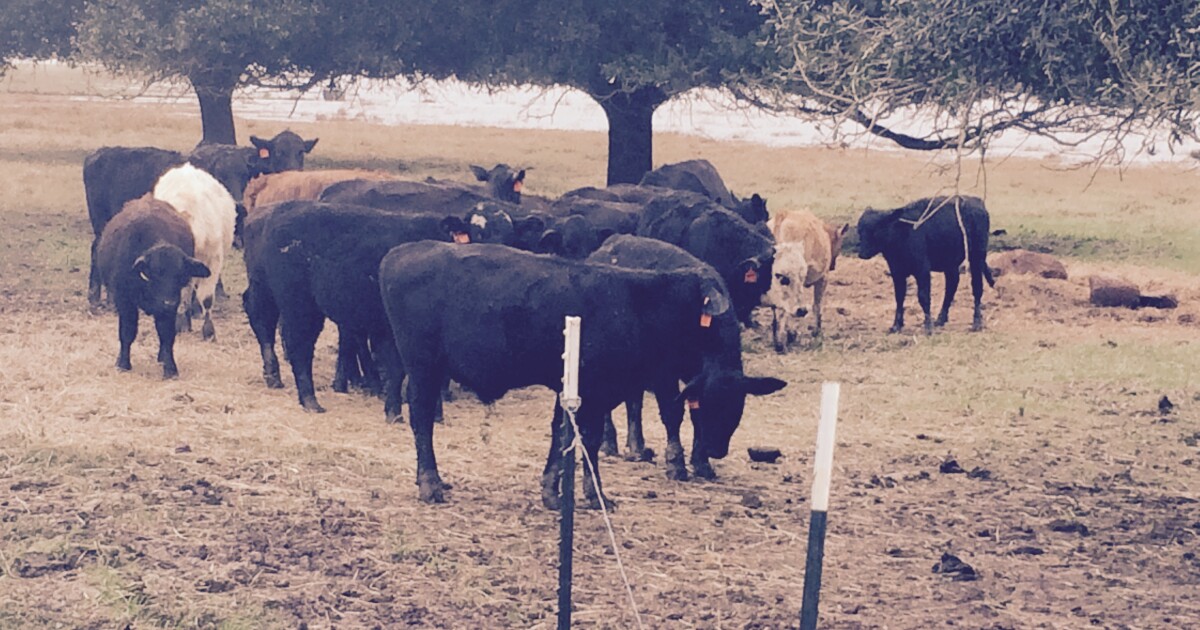 As part of our ongoing report on flood recovery in Louisiana, Betsy Shepherd set out to tell the story of Guidry Brangus Ranch, a family ranch in rural Vermilion Parish. Struggling to recover after being submerged in flood waters last August, Shannon Guidry was planning to sell her farm. But just weeks after the interview, another tragedy struck – and this story of resuming farming took a turn no one could have imagined.

When Rhonda Guidry was in her senior year of high school, she and a friend took a vow never to marry someone from Vermilion Ward – they wanted to leave the life they knew.

But Rhonda Guidry ended up marrying someone from this rural part of Louisiana’s coastal farming communities – Shannon Guidry, her husband of 33 years.

“We got married about 6 months and he came home one day and said I wanted to get into farming, and I was horrified,” Rhonda recalls. “I grew up on a farm, but that’s just not the life I envisioned. And then my dad reminded me that it was a good life. And so I supported him.”

Rhonda began her career as a full-time nurse, while Shannon founded Guidry Brangus Ranch. The 444-acre farm is home to 160 registered Brangus and Akaushi cows used for herding and beef production.

Storms in August dumped torrential rains over southwestern Louisiana. Due to coastal erosion and land subsidence, the parish of Vermilion was submerged. “This flood put me in a place I had never been before. I was exhausted, ”said Shannon Guidry.

Rhonda saw the stress her husband went through. “I had never seen him like this. He was just trying to figure out how he was going to take care of his animals.”

The water rose so quickly that Shannon couldn’t evacuate her herd. He used a boat to bring food to his cows, but even the heights were underwater. “These cows here stayed in the water for a week,” Shannon said. “There was probably a foot of water there and I guess they just slept there. It was horrible to watch, but there was nothing you could do about it.”

When the floodwaters subsided, there was long-term damage to deal with. The grass was dead and the cattle had nothing to eat. Shannon had to transport her herd and take them off the site because the flood turned her pastures into mud pits. Shannon had to truck 160 cattle hundreds of miles to a farm in northern Louisiana, where they stayed for several months.

“I was afraid we were going to kill them in the truck,” Shannon said.

Only one of Shannon’s cows drowned in the flood, but he lost 8 more to illness and disease during transport. The stress of the flood also caused her heifers to miscarry and stunted the growth of her calves. “We lost these pastures in August and September, that’s what we really need to finish these calves, and that’s what really hurts,” he said.

I interviewed Shannon in early December. There was more flooding, this time 10 inches. Although the damage was minor in comparison, the extreme weather conditions and the fear of them were doubly distressing. “We don’t have two inch rains anymore, we have six inch rains, we have 26 inch rains,” Shannon said. “The climate is changing. We have severe storms.”

Local experts coined the term “rain anxiety” to describe the post-traumatic stress disorder experienced by many flood victims. I asked Shannon if he could tell if his cattle were stressed.

“Oh, you see it. Everything we give them they give up. They want something better. Right now they’re just crazy,” he said.

The August floods took a heavy emotional toll and the financial losses were too great. Shannon therefore made the difficult decision to retire from farming after 32 years. “I can’t follow this anymore. I’m going to sell this. This is all for sale. I told my wife it’s not working.”

Then something tragic happened. Less than a week after I spoke to her, Shannon had a fatal accident on the farm. Rhonda remembers what happened:

“December 14th was a typical day for us. Around 12:30 pm my phone started ringing. I ignored it at first. The third time. I had to call and see what was going on. Casey [Shannon’s farmhand] Mrs. Rhonda said, there was an accident: the bull attacked us.

Andrew Granger is the Vermilion Parish Livestock Field Officer for the Louisiana State University Agricultural Center. He has worked closely with Shannon over the years, especially after the Flood. Although he was not present, he remembers the details of the accident.

“The bull started to act and attacked his hire and he stepped in to help,” Granger explained. “The bull got on top of him and really ruined his leg.”

Rhonda recalls, “The nurse came over. I said I wanted to know what was going on, don’t beat around the bush. And so he said his artery had been cut.”

Shannon Guidry lost too much blood and died.

Rhonda was in shock: “My heart is really broken. But I have such heartwarming memories and I know he’s always with me.”

The floods did not cause the bull attack that claimed Shannon Guidry’s life; but Andrew Granger says the repeated flooding may have exacerbated the bull’s aggressiveness, “Stress on cattle releases fight or flight hormones, cortical steroids are one of those concerns. S ‘they feel stuck, they can come to you. “

Rhonda agrees. “We had a bull that stayed in water up to the chest for 8 days. He was angry. It was his reactive mode.”

Courtesy of Rhonda, Casey shot the bull down. No other incidents of assault on livestock have been reported since the floods.

Before she died, Shannon had planned to sell the farm he loved. Rhonda thought that after her death, that’s what she would do. “My first initial reaction was that the cattle have to leave, because I always told her you didn’t dare leave me with this farm, I don’t know what I would do with it,” she said. “And when the dust finally settled in, I realized what he had put in there. I’m not going to let his legacy die. I’ll give it a shot.

Local ranchers mentor Rhonda as she re-acquainted herself with life on the farm. And as a nurse who works closely with patients suffering from PTSD, Rhonda feels up to the challenge of rehabilitating the farm and her life. “I have never kissed these animals until now and I realize what his passion was,” says Rhonda.

And despite the setbacks and struggles of 2016, Rhonda is confident it will be a year of turnaround. “Whether it’s politics or the Flood, we have to embrace what we’ve learned and what we’ve been through and try to find the positive,” she says. “It must be better, and it will be.”

This story was made possible by the Louisiana Public Radio Partnership, with support from the Corporation for Public Broadcasting.

How to buy a cattle ranch in the United States: don’t be moved

Securing the future of beef production in Africa — ScienceDaily