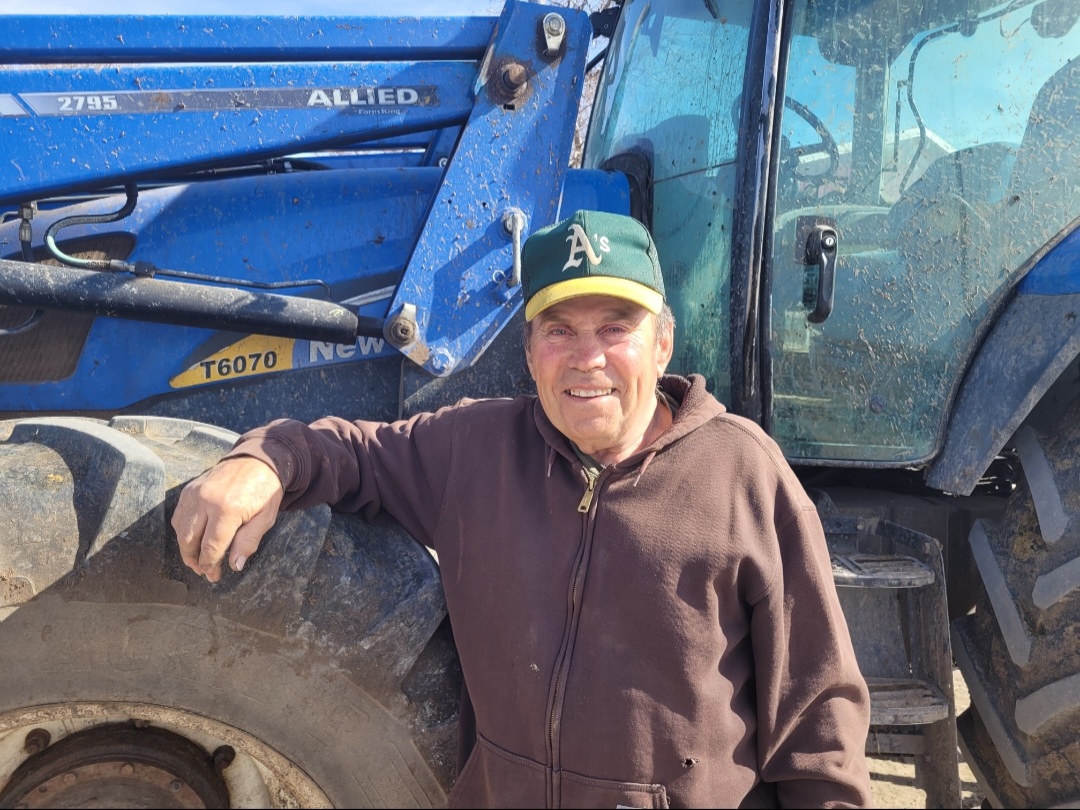 If there was ever a “Prairie Tough” list, Ron Borys would be sure to be at the top of that list. Aged 79 in July, Ron continues to herd cattle about 40 kilometers north of Weyburn. As the old saying goes, ‘If you win in the morning, you win the day’, Ron wins every day by getting up around 4am to tend around 120 head of cattle.

“The beauty of early mornings is that it’s usually calm, we always seem to get quite a bit of wind in this country, if you get up early in the morning and if there’s going to be calm weather, that’s normally when it’s is,” Ron explained. “Then you hear the birds singing, and it’s so beautiful and peaceful outside, if you appreciate mother nature, you’ll enjoy the mornings more than ever.”

We asked Ron how long he’s been a cattle rancher and what changes he’s seen over time.

“I’ve been milking cows since I was 9, back then, of course, when I was just a young man, it was all just loose hay, everyone said man, you got good big hands, I can tell you. It wasn’t picking my nose,” chuckled Ron. “It was just like that, you worked hard, and you built up a lot of muscle and strength, of course, (referring to himself) which is all gone now.”

As a young man, Ron’s dream was to farm. Around 1963, Ron and his wife Carol moved to the land and began raising their family. While he was excited to actively pursue his dream, achieving his dream meant going through several difficult years.

“I have to thank my parents so much, they let me use their land as collateral to buy my first farm, and we never looked back, it was very difficult the first few years,” Ron shared. “S*** I was going to let my parents down because of a decision I made.”

As the 60’s rolled on and determined to honor his financial commitments, Ron was ready to take on one of the toughest laborer jobs there is. Working 16 hour plus day shifts in extreme cold and heat, Ron had now entered what is often referred to as the ‘working man’s playground’, Ron began to grind on the oilfield .

“I ended up working, the highest paying job at the time for a laborer was rough, when I started I was making $1.95 an hour driving a hundred miles one way,” said explained Ron. “It was just the first check, the second check, we got a raise, we ended up getting a 10 cent an hour raise to $2.05, and we thought we had the world by the has **.”

While continuing to farm, the oilfield took Ron overseas.

“In 1971 I went overseas for a job with this oil company for $1500 a month, which was a lot of money, you couldn’t make that kind of money here,” Ron said. “The next posting, they sent me to a big sandbar off the east coast of Canada called Sable Island.” Ron’s work overseas in the oilfield also took him to the Philippines.

Keeping its financial commitments to his parents, the oilfield has helped Ron pay the bills and build a life for his family. He eventually started cultivating 3000 acres and raising up to 300 head of cattle.

We asked Ron what was his fondest memory as a cattle rancher.

“When the kids were home I had given all the kids cattle, let them choose what they wanted, my youngest son had a cow that had triplets, she had five sets of twins and a pair of triplets and she raised all of them, she was an amazing cow, she had only one birth the whole time we had her,” said Ron. “Why her fertility was so much greater in this cow, I have no idea.”

The memory of his son’s cow brought a tear or two to tough guy Ron.

“I’m quite a sentimental person, most people remember me as a badass, but deep down inside I’m not,” Ron shared.

We asked Ron if he had any words of wisdom to offer young grain and livestock producers.

“You know what, never give up on a dream, I come from a big family, I never thought I would have the chance to cultivate,” Ron shared. “Nothing but perseverance and finally I had a chance in life.”

The long hard work paid off, and now towards their senior years Ron and his wife Carol have a second home in Weyburn and are now renting out their 3000 acres of land. As Ron’s health has started to decline slightly, he is now looking to sell the rest of his cattle this fall and make much needed trips.

“We’re going to do a lot of traveling; we have a daughter in California, and I have an old boyfriend that I met overseas, one of the greatest people I’ve ever met who now lives in Houston, Texas, we’ll usually go around a whole bunch of places in the United States,” Ron explained.