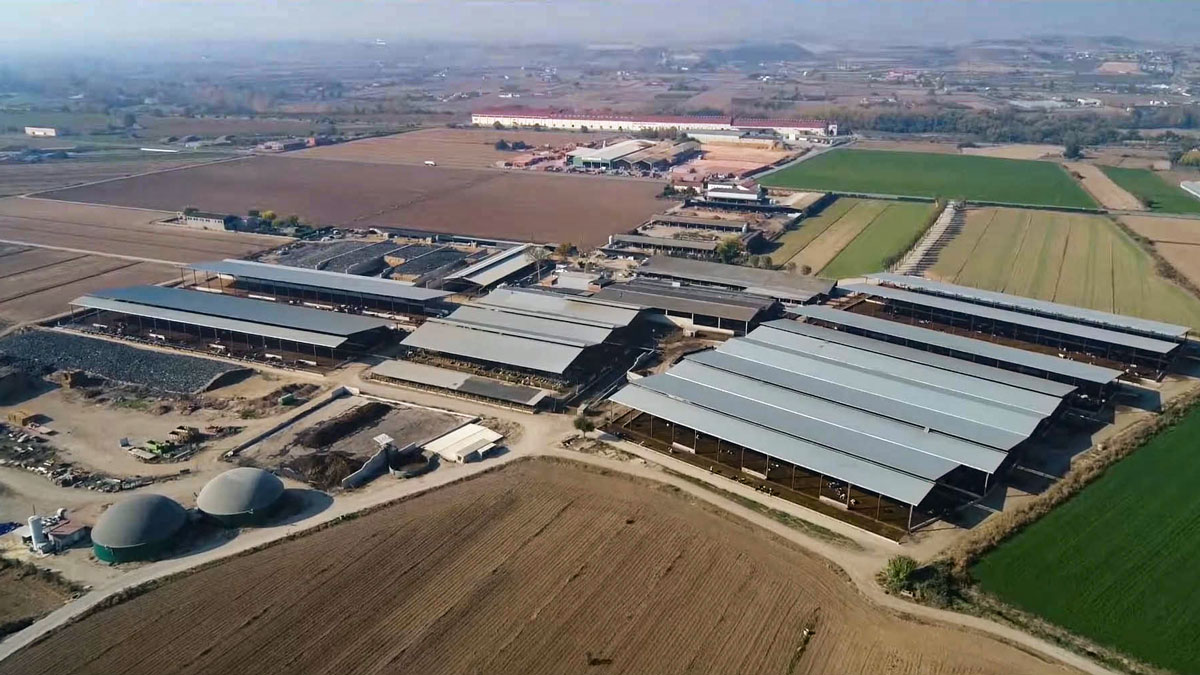 Currently, the German biogas specialist WELTEC BIOPOWER is building a biomethane plant for Spanish dairy cattle breeding Torre Santamaría. Since the commissioning of the first 250 kW biogas plant in 2011, the Catalan family business has been able to cover all of its energy demand from its own residues. The Vallfogona de Balaguer farm was the first milk producer in Spain to use residual materials for energy production.

The investment in the new RNG / biomethane plant amounts to more than 4 million euros, a quarter of this amount will be devoted to the modernization of existing infrastructure and the biogas plant. One of the reasons that Catalonia’s second-largest dairy producer is able to allocate a budget of this magnitude is that biomethane sales had already been contractually secured at an early stage. Green gas must be marketed as a climate-friendly fuel through an energy service provider.

“We see this DA plant as an environmental investment, as it allows us to reduce our own greenhouse gas emissions to almost zero and generate additional income from biomethane. explains Juan Bautista Pons Torrades, general manager and owner of Torre Santamaría.

In addition to its pioneering spirit in terms of the environment, cattle breeding in the province of Lleida is also a forerunner in other areas. For example, Torre Santamaría was one of the first to introduce easily digestible A2 milk. In addition, in 2019, the company was the first dairy cattle farm to be certified by the Lactalis Group in recognition of its efforts in favor of animal welfare. The Lactalis dairy group buys some 22 million liters of milk per year from Torre Santamaría and sells it under different brands.

“To produce this quantity of milk, we breed 2,300 dairy cows and 2,100 calves on an operating surface of 14.2 hectares,” explains Juan Bautista Pons Torrades. Each year, some 60,000 t of input substances accumulate for use in the production of biogas. Cattle manure makes up about 90 percent of the substrate. The litter composed of crushed straw as well as the remains of silage are also introduced into the digester. Currently, WELTEC is installing two additional stainless steel digesters for the digestion of all farm residues. Each of the digesters has a height of 6.30 m, a diameter of 26.87 m and a capacity of 3,573 m³.

According to Kornweibel, the existing 250 kW cogeneration plant will continue to operate despite the transition to RNG production. The farm is thus able to cover its own needs in electricity, heat and hot water.

Once the new plant is completed in the summer of 2021, Torre Santamaría will continue to meet its energy demand from its own raw material. In addition, the operation of the plant allows the Catalans to assume their corporate social responsibility and maintain a healthy balance between the environment, social concerns, economic factors as well as the security of the food supply and energetic.

The WELTEC Group de Vechta, Germany, has become a leading global specialist in the construction and operation of biogas and biomethane plants since its creation in 2001. The Group designs, plans and sets up energy plants, operates them on a permanent or temporary basis, provides a 24/7 service and offers concepts for the sustainable use of production flows, thus covering the entire biogas value chain.

The implementation of individual and technically mature solutions up to an installation size of 10 MW is one of the strengths of WELTEC BIOPOWER. The high proportion of custom-developed components is a key success factor. In addition, the use of stainless steel technologies ensures flexible substrate entry, fast and inexpensive assembly and a consistently high quality standard regardless of location. After commissioning, the mechanical and biological department of WELTEC plays an important role in ensuring the efficiency of the plant.

The company also has extensive experience in the production and use of biogas. The company’s nine decentralized plants generate 96 million standard m3 of biogas per year. Most of it is transformed into biomethane and made available to energy suppliers and service station operators via the public gas network. In addition, at 16 sites in Germany, for example in the fields of horticulture, housing construction and healthcare as well as communities, biomethane is used to produce heat under WELTEC energy contracts.

The biogas specialist is well aware of the importance of customer and investor proximity. The Group’s sales and service network therefore spans the entire globe. The range of customers includes companies from sectors such as agriculture, food, waste and wastewater. To date, the 120 employees of the WELTEC Group have set up more than 350 power plants in 25 countries on five continents. These factories save around 485,000 tonnes of CO2eq per year.